On Friday, I went to hear Azedeh at Room 5 on La Brea. Room 5 is a small bar with a lounge on a first floor. I walked in half way through the concert and found my friend Eli Ziv in the first row hearing the music and crying. I thought "it can't be that bad" but when I sat next to Eli he whispered to me "These love songs are breaking my heart because I am remembering my girlfriend." Hearing such high praise for the music made me listen more carefully to the set.
Azedeh is a young English girl who sings love songs with guitar and piano, no band. She follows the American performing mantra, scream till you drop and abuse the high notes, but by God does she do it well. She has complete control of the instrumental part, complete control of her voice and complete control of her audience (which was full of fans). Lyrics could also be a bit more imaginative than "I love you so, so much, I can't live without you" but, alas, her target audience eats it up just as well. - Azedeh, love,  if you are looking for someone to write lyrics for you I am available and I leave here my application. - As for me, I liked the concert, I liked Azedeh's boots and was even the first one to start singing a spontaneous happy birthday to Azedeh that was joined by the rest of the audience.
I have a feeling we will hear more of Azedeh in the future.

Whenever I get back to Portugal I always hear stupid stereotypical shit like "You need to eat here, before you go back to America and eat those hamburgers". The notion that just because corporate America exports a particular German dish then all you eat in America are German cow meat dumplings, is ridiculous.
There is an unparalleled variety of ethnic cuisines represented in the United States, on this post I will focus, nevertheless, on this morning's brunch (another unique American invention the fusion of breakfast and lunch). There is a universe of typical American cuisine areas of expertise, from the roasts, to pies all the way to cajun.  But today I went to one of the best African American fried chicken joints around. That's right my European friends, there is such a thing as African American cuisine, though I'll just call it black because I am not PC. Black cuisine basically involves fried chicken with various types of gravy and soft bakery, from biscuits (American for scone) to pancakes and waffles.
I went for brunch at "Roscoe's  Chicken n'Waffles" in Hollywood. In LA it's very hard, almost impossible to find a restaurant that is not a chain even if it's a chain of two, so this is not the only Roscoe's around. I was seated as soon as I arrived, I ordered an Arnold Palmer to drink and an Obama's Special - it wasn't an Italian restaurant or else it would have been the Scalia veal.  The Obama had three pieces of chicken wings a waffle with butter and maple syrup. The flavor fusion may shock some of you on the other side of the pond as it shocked me when I got here, but I assure you it is delicious.
The only problem with Roscoe's is the price, 14 dollars plus tip is not a good price, specially when another black restaurant that uses biscuits instead of waffles,  Honey's Kettle in Culver City, matches the quality and portion size for less than 12 dollars. 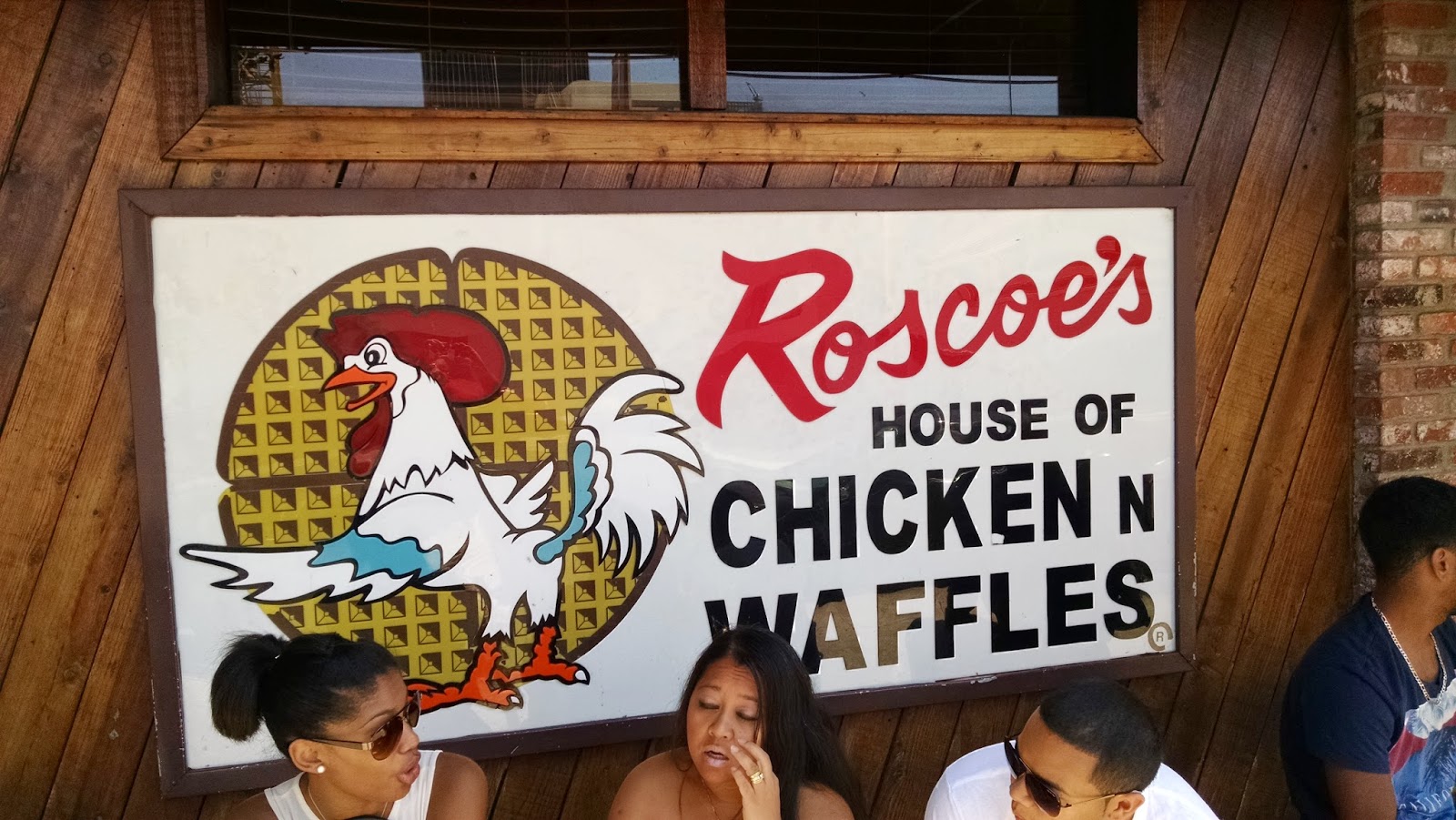 They call them drones but they are not automatic mechanical devices resembling a human or an animal. Drone is the pompous name given to unmanned aerial vehicles (UAV) to make them sound less threatening. UAVs allow surveillance and occasional attacks (with missiles) on the enemy. They have been in vogue in Afghanistan, Iraq and Gaza. They spare costs, risks and to a lesser degree lives in the security forces using them but they have been highly criticized by human rights organizations who find the capacity of a bureaucrat to kill people in a different continent with a joystick, reckless and dangerous.
Everyone who lives in Los Angeles is familiar with the extremely noisy helicopter flights over the houses that bother people in the middle of the night and help create the XXIst century concentration camp mood of the city. Once, when someone broke into my building's garage and got inside my car the police had nothing better to do than to fly an helicopter over my building the day after the break in happened. I don't know if the thieves were scared wherever they were, but my neighbors were certainly bothered.
When you study the history of empires, from Rome to America passing by Portugal, Spain, Holland and Britain, you learn that military technology developed to be applied on the far corners of the empire is always applied later on back home in the center of the empire. It is no secret that LAPD officials have recently travelled to Israel to get training and to purchase drone technology. Yesterday while walking down the street I spotted my first drone. Small and silent, I almost missed it. Big Brother is watching us a lot closer.
Things might not get safer but they will certainly get a lot less noisy.

I called my friend Eli Ziv this evening to meet at Sonos Studios an acoustically designed gallery that celebrates music listening. So I got in Sonos Studios and saw a bunch of people lying down in mattresses hearing repetitive new age music (weird sounds but I will call it music) and elliptical art videos projected on big screens. It was as if I was in the Twilight Zone. The environment was exotic and I even tried to meditate but the reason for the line outside will remain a mystery to me. Conversation about the Middle East conflict was interesting but Eli tried to throw a shoe at me. Considering his object selection I think Eli is becoming an Arab, who says there is no hope for the Middle East conflict?

There are three signs of the arrival of the apocalypse, Snoop Doggy Dog making a reggae album, RuPaul coming out as straight and me writing a post about underwear. So, in face of the title of this post, we arrive at two conclusions, one the end is near, and two the future of the world is in the hands of RuPaul. If the first conclusion worries me the second leaves me extremely comfortable with the future of our species.
Today, I woke up and said to myself "it's time to buy underwear", I could have said something else like "it's time to watch a movie", or "it's time to get a foot massage" but instead I thought I might as well buy underwear. Social norms tell us that underwear has a sexual connotation and as such it is mainly a female concern. Women worry about which underwear they should use, so they can look more attractive to their partners, though for most men lingerie (if it's a word for fancy underwear it should be in french) is a hassle and something that is separating them from a naked woman.
Straight men don't care about underwear, specially theirs. There is in the US nevertheless, a rule, a female imposed rule - NEVER WEAR SPEEDOS. Now Speedos is a brand of swimwear but what Americans mean with this expression is don't wear jokey briefs. Women in America think jokey briefs make men look effeminate, just like scarfs. Whenever you use a scarf in America women always ask you if you are European or gay. So men don't care about male underwear but in America women do. American women don't want men to look gay or European when they take their clothes off to have sex with them - making sense?
Because boxer shorts are a fashion statement that disappeared in the 90's, Americans came up with the boxer briefs, which are jokey briefs that go slightly down the thigh covering a bit of the upper leg. That small piece of fabric makes the difference between a gay, European man and a MAN. H&M has specialized in boxer briefs and it struck up contracts with David Bekham (who played soccer in America but actually played football in Europe) and film studios like Warner Brothers and Lucas Film to produce movie themed boxer briefs. That's right. Not only won't you look gay and European with H&M underwear you will also entertain your partner with film commercials before you have sex, or at least make her think she is getting laid with David Bekham (who is European). I have some boxer briefs from H&M but they don't last long and soon get holes in them.
When visiting American Apparel some years ago I found out they had really cool jokey briefs. Now they are back in fashion because of the whole retro thing. I bought a pair then. They were comfortable, and really well done - they are produced in downtown LA. I still have the pair I first bought and I have bought many American Apparel jokey briefs since and they have all lasted years.
So this morning I went to American Apparel to buy another pair of jokey briefs but I bought them with the colors of the American flag because I don't want my female partners to think I'm European!

I met Sam Babayan a year ago on The Euro Luau For Carmen (http://thewayiseeitla.blogspot.com/2013/07/yesterday-my-friend-benjamin-organized.html) a gentleman and a scholar Sam played then a great set under the LA night stars and I promised him I would comeback for more.
As I am a man of my word, yesterday, I went to hear Sam's band The Dirty Diamond play at the Harvelle's, a small Rock and Blues joint on 4th Street, Santa Monica. The diamond may be dirty but the sound was as clean as a marine latrine after inspection. Dirty Diamond has a tight sound, a great lead guitarist and Sam's astonishing voice. It also helped the fact the previous act Duane Betts and his band were also pretty good.
The environment was OK, though it wasn't exactly a rock crowd attending. It was more older people and some slick thirty year old rich boys, but as long as I can find my beer and hear the band, alles kosher.

Yesterday,  at around 9 PM, I was walking around Beverly and La Brea, LA's little Jerusalem, (yes, I will consider Pico and Robertson little Tel Aviv) and I passed by a place called Voila!. It was full of pretty well dressed people in total contrast with the orthodox surroundings. I approached Voila's door and the blond hipster at the door asked me "are you here for Lena?" - Was I ? - "Yes" I answered and I got in.
It was the launching concert of the new album of an artist called Lena Fayre. Voila! is a vintage art gallery that evolved into a furniture and lighting design space. The owner is European and you can clearly feel that reference in the vibe of the place.  The room was crowded and the walls were full of art. The music was very ten's, meaning very blend and repetitive. It could play on NPR and you wouldn't even notice. A kind of androgynous Florence And The Machine.
I got a grapefruit vodka, sat down, and listened to the concert as it was being recorded and live streamed. I thought how strange it was to be in a hipster party in the middle of a Jewish orthodox neighborhood. I took two pins from Lana and a white rose before I left and tried to walk in a vodka straight line back home. Check the Voila! Gallery next time you are in West Hollywood. It's definitely worth a visit. 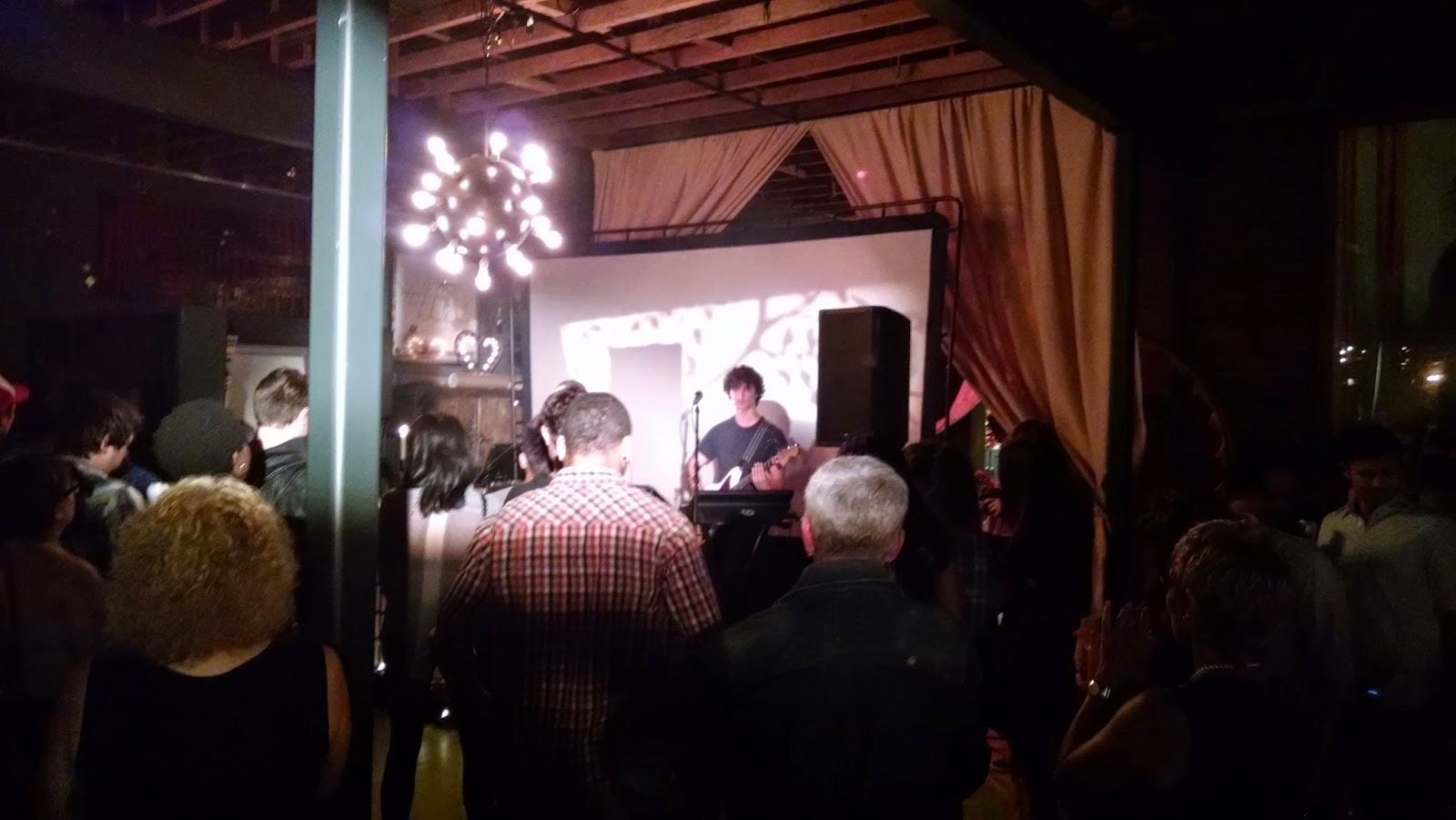 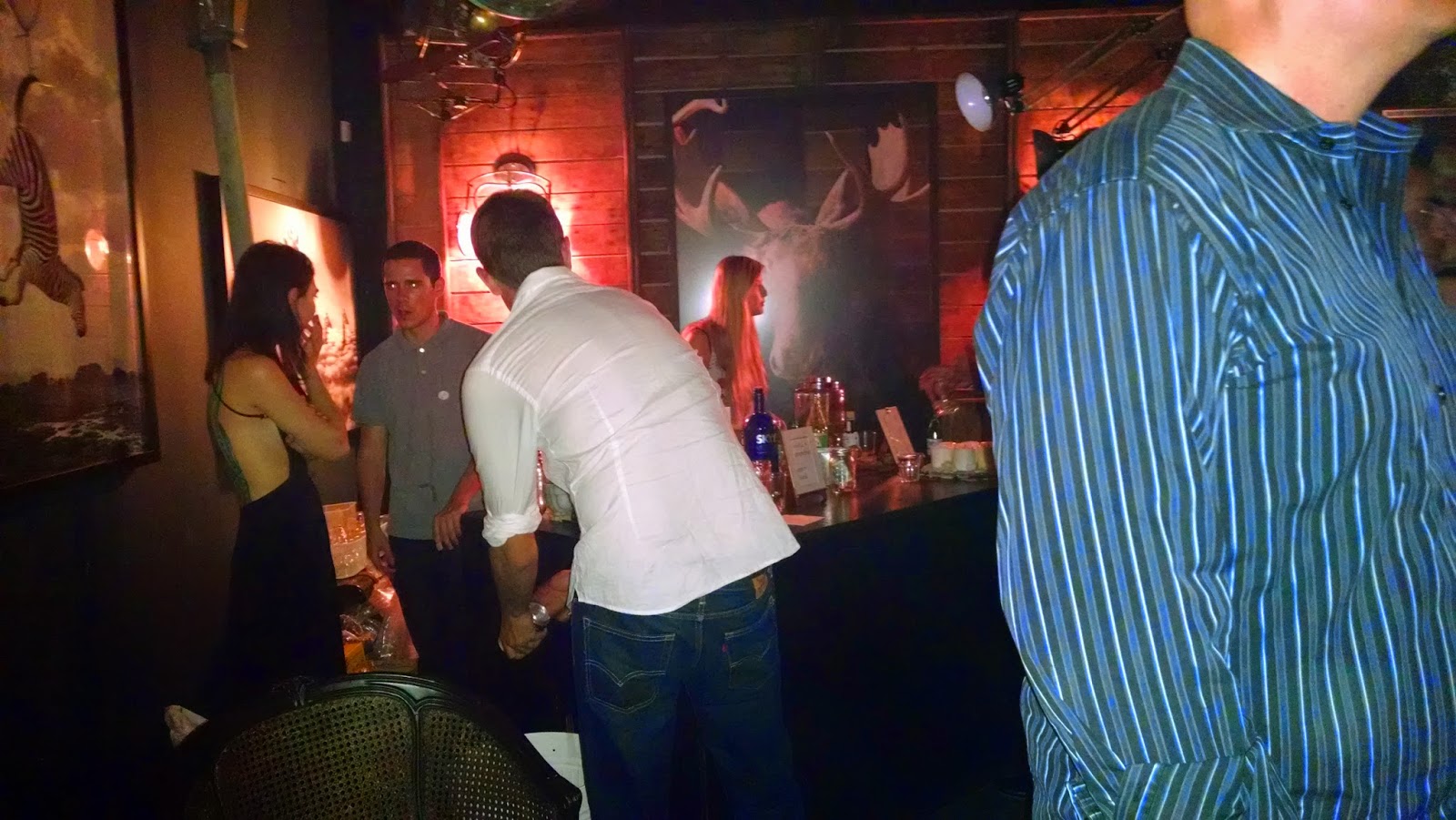 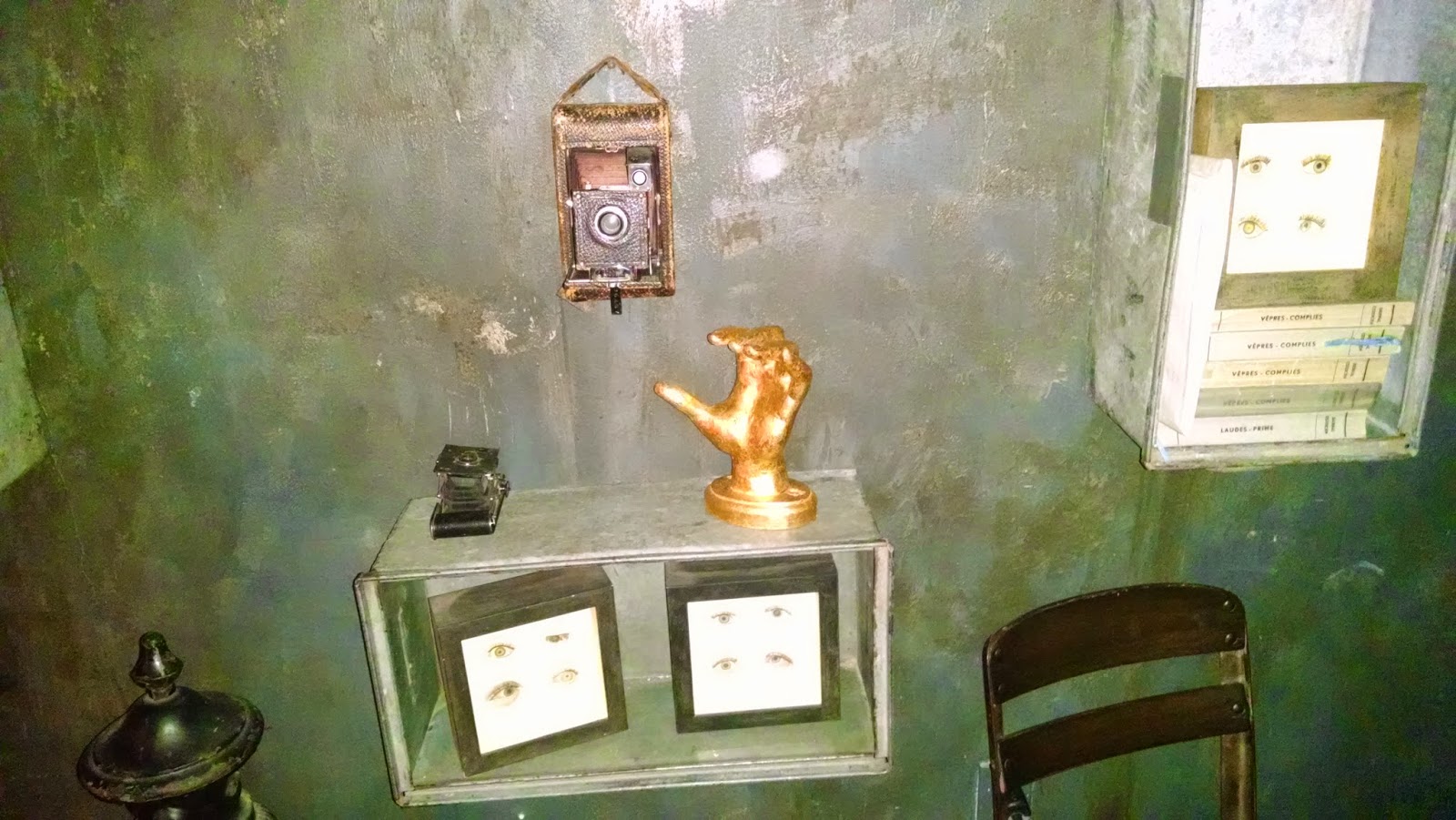